The sixth Annual Meeting of the International Qur’anic Studies Association was held in Denver this year from November 16-19, concurrent with the annual meetings of the American Academy of Religion and the Society for Biblical Literature. This year once again provided an opportunity for scholars from across the academic world to come together to exchange new ideas and continue ongoing conversations on the Qur’an, the milieu from which it emerged, and the exegetical discussions which it inspired. 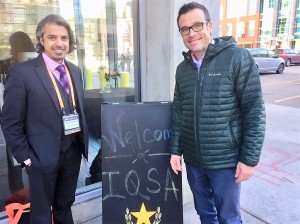 The first panel of the weekend, chaired by Alba Fedeli, focused on the topics of accessibility and interpretation as they relate to Qur’anic manuscripts. The early history of the Qur’an, as indicated by manuscript evidence, was a recurring theme, including the import of the Sana‘a palimpsest, the role of orthography, and interlinguistic connections. Participants also considered the role of digital technology in opening up new paths for manuscript studies and the relevance of these tools for the Qur’an in particular. The day was capped off by a lively general reception for IQSA members. 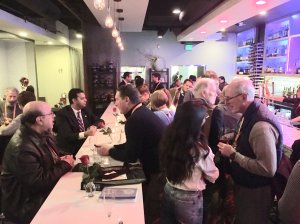 Saturday was the first full day of talks, beginning with a panel on linguistic and literary perspectives on the Qur’anic text. The ambit of this discussion ranged from specific words (Shawkat Toorawa on awtād) to broader concepts (Saqib Hussain on ḥikma) to linguistic context (Marijn van Putten on the lack of Syriac borrowing in the Qur’an) to theoretical frameworks (Joseph Lowry on a ‘nomochronic’ assessment of the Qur’an’s normativity). After a luncheon which brought together senior scholars and graduate students, the afternoon featured an important and lively panel discussion on the topic of bias, representation, and the importance of diverse perspectives in Qur’anic studies. The panel highlighted both the work already undertaken to widen the scope of the field and significant improvements that have yet to be made. The day closed with a panel on manuscripts and commentaries, which featured Iskandar Bcheiry’s consideration of the Arabic and Syriac manuscript resources of the St. Lazarus monastery in Venice, along with Hacı Osman Gündüz discussing the concept of ṣarfa in al-Nāshiʾ al-Akbar’s poetry and Sheza Alqera considering the importance of oral context in an understanding of manuscripts. 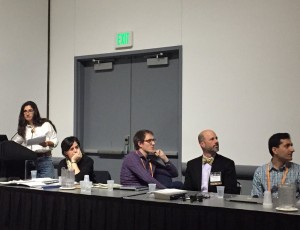 The third day of the conference was again full of panels, kicking off with a morning session on ways of contextualizing the Qur’an. Sarah Schwarz and Tommaso Tesei focused on the relevance of a Jewish background, respectively discussing Solomonic power and 4 Ezra 7. David Powers revisited the question of Zayd, Zaynab, and Muhammad, and how to understand the historicity of the traditional story combining those three figures. Finally, Johanne Louise Christiansen presented a summary of Roy Rappaport’s contributions to system theory and considered its relevance to studying the Qur’an. The theme of the Qur’an’s place within the Biblical tradition continued in the afternoon, with talks focusing on Hārūt and Mārūt from a comparative perspective (Rachel Claire Dryden), the polemical understanding of accusations of God’s poverty in Q. 3:181 (Shari L. Lowen), the theme of prophetic protection and Satanic utterances (Holger Zellentin), and the connection of Joseph to the rhetoric of clothing in the Qur’an (Sarra Tlili). The evening session completed the day’s emphasis on placing the Qur’an in a Late Antique world of literary and religious influences. Stephen Burge considered the interreligious rhetoric of fasting, while David Vishanoff discussed the tradition of an Islamic psalter, and Stuart Langley compared Q. 7:179, Isaiah 6:10, and Matthew 13:15. 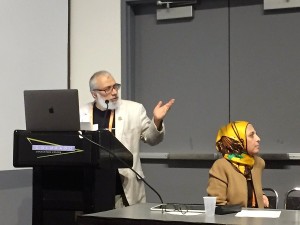 Monday, the last day of talks, brought together themes ranging from hermeneutics to genre theory to the Arabian context of the rise of Islam. In the morning set of presentations, Gabriel Said Reynolds offered thoughts on the problem of Qur’anic insertions, followed by Thomas Hoffman reflecting on a materialist understanding of the Qur’an’s iconicity and Johanna Pink considering the evolution of the term ṣabr between medieval and modern exegesis. The afternoon featured IQSA’s annual session on Sūra Studies, which this year was dedicated to the group of sūras known collectively as the Musabbiḥāt (Q. 57, 59, 61, 62, and 64). Both Adam Flowers and Karim Samji focused on genre as a method of understanding this grouping, while Andrew J. O’Connor spoke about the function of prophetic authority within them. Finally, the weekend concluded with another set of talks looking at the Qur’an through the broad lens of Late Antiquity. Four discussants considered a wide-ranging set of topics, including the Greco-Roman image of Arabia (Karen L. Carducci), the topos of Trinitarian deities between Arabian religion and the Qur’an (Emran El-Badawi), the long history of camel sacrifice (Brannon Wheeler), and the attestations of earliest Islam extant in Anastasius of Sinai (Stephen J. Shoemaker). 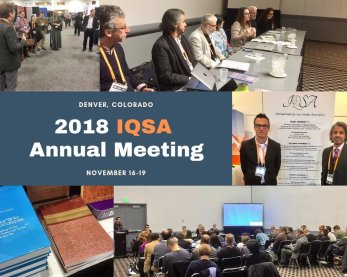 This year’s Annual Meeting was one of IQSA’s most outstanding yet, packed with excellent presentations across the board and consistently high attendance. It was exhilarating as always to see the flourishing of new perspectives within the world of Qur’anic scholarship as well as the always impressive level of academic rigor exemplified by all of this year’s speakers. We look forward to moving from the shadow of the Rocky Mountains this year to the sunny shoresof the Pacific for next year’s meeting, and hope to see faces both familiar and new there!