By Daniel A. Brubaker, Ph.D. 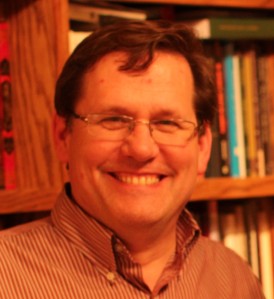 Keith Edward Small, scholar of Qurʾan manuscripts who made significant contributions to the field of Qurʾan textual criticism, passed away early morning Thursday, December 6, 2018 in Oxford, UK, having been admitted to hospital earlier in the week.

Keith was diagnosed in 2016 with AL Amyloidosis, a rare blood disorder without known cure that causes protein deposits on vital organs. As the disease progressed, mobility and regular activity became more difficult. Dialysis became a regular routine and Keith had been in and out of hospital. He kept up writing activities and correspondence throughout as much as he was able, and his characteristic kind and gentle demeanor remained evident to those around him.

Keith was a friend of IQSA from its beginning, having served as the inaugural unit chair of the Manuscripts and Textual Criticism unit. He felt deeply, along with the other organizers, the need for a public space to foster the critical study of the Qurʾan.

Keith was born July 24, 1959 in Battle Creek, Michigan. He took his BA from Western Michigan University, a Masters of Theology (ThM) at Dallas Theological Seminary, and then his PhD at the Guthrie Centre for Islamic Studies at London School of Theology. On August 10, 1985, Keith and Celeste were married.

Discussions with Muslim friends and a realization that many questions remained unanswered about the Qur’an’s transmission as a physical object formed the impetus for Keith’s advanced scholarly inquiry.

Prior to achieving his doctorate, Keith traveled to meet with scholars who studied the early Sana’a, Topkapı, and Samarkand Qur’an manuscripts. After the reintroduction of the Bergstrasser archives, said to have been destroyed by Spitaler after WWII, Keith was invited by Michael Marx and Angelika Neuwirth to the first Corpus Coranicum conference at the Free University of Berlin in 2005. At this conference, Keith’s paper comparing early variants in textual critical issues, reminiscent of the critical edition of the Qur’an projects initiated Jeffery and Bergstrasser, was appreciated by those present, including Neuwirth and Marx, Gerd-R Puin, Noja Noseda, Andrew Rippin, and Efim Rezvan. Hope was in the room for various reinitiated projects since Bergstrasser’s death in 1938 and Arthur Jeffery’s subsequent lament in 1959 that a truly critical edition of the Qur’an was perhaps now beyond reach of scholars.

Keith authored several books. His Textual Criticism and Qurʾan Manuscripts (Lexington, 2011) was the first of its kind and has become the standard introduction to the subject. Keith’s work was always circumspect; he wished to treat his subject with integrity and honesty. A committed Christian, he strove to be meticulous in his analysis and critical in assessments without overreaching the evidence. This approach earned him not only the admiration and trust of colleagues, but also a position as a Manuscript Consultant to Oxford’s Bodleian Library for their Qurʾan manuscript collection, where he has had an office since 2014. As part of this work, Keith was asked to produce Qur’ans: Books of Divine Encounter (Bodleian Press) to accompany the first exhibition at the newly renovated Weston Library (the Special Collections library of the Bodleian) to showcase the collection. Keith was a visiting lecturer and associate research fellow at the London School of Theology and a guest lecturer at Oxford University, as well as having presented papers at conferences in Britain, the United States, Germany, and France.

Keith was a friend to me. I met him in 2005 and was quickly drawn to interest in Qur’an manuscripts after seeing his work. From the start, he was helpful to me and provided direction, contacts, and resources. He provided my first opportunity to present a conference paper on the topic, at MESA in San Diego on a panel that also included David Powers and was chaired by Emran El-Badawi. It is true to say that I owe my current work in Qur’an manuscripts in significant part to the kind mentoring guidance of this wonderful man, Keith Small.

Throughout this past year, Keith has been working toward completion of a final book project, a book that uses Christianity and Islam to explore the popular assertion that all religions believe the same thing. It is our understanding as of a month or so ago that Keith was on the final chapter of this book; we hope it will be forthcoming soon.

Keith was 59 years old. He is survived by his wife, Celeste, and their three adult children, William, Taylor, and Beverly.