Submissions are solicited for a one-day symposium on ‘The Qurʾān and Ethiopia: Context and Reception’, which will be held at The Catholic University of America (Washington, DC USA) on Monday, April 8, 2019.

Connections between the Qurʾān and Ethiopia are vast and varied. On the one hand, Ethiopia provides an important historical context (among many others) for understanding the Qurʾān in its Late Antique milieu. After all, throughout Late Antiquity, Ethiopia was a major political power, situated just across the Red Sea from the Arabian Peninsula. Occasionally, Ethiopia even interceded directly in affairs in the peninsula, as evidenced above all by the Najrān episode. In addition, Islamic literature relays many connections that Muḥammad and his followers had with Ethiopia, including most famously the first Ḥijrah in which companions of the prophet sought refuge in Ethiopia. Thus, it comes as no surprise that there are Ethiopic loanwords in the Qurʾān, perhaps none more saliently than the Ethiopic word maʾǝdd ‘table, Eucharist’, which is found as the name of the fifth sūrah (al-Māʾidah). While Ethiopic loanwords in the Qurʾān have long been known, a number of questions remain: What do these loanwords tell us about the context in which the Qurʾān came into existence? And, more broadly and significantly, can we move beyond loanwords? That is, what are the other ways in which Ethiopia may provide a context for understanding the Qurʾān in its historical setting?

On the other hand, the Qurʾān also had—and still has—a reception in Ethiopia. Modern day Ethiopia is home to a sizable Muslim community: The 2007 census reported that just over one-third of the country’s ca. 74 million inhabitants identified as Muslim. Similarly, in neighboring Eritrea, which is historically part of the ancient kingdom of Axum, almost half of the ca. 5.5 million inhabitants in 2011 were Muslim, according to a report by the U.S. Department of State. These modern Muslim populations have historical antecedents stretching back to the rise of Islam. Thus, Ethiopia provides fertile ground for studying the reception of the Qurʾān for well over a millennium. The reception of the Qurʾān in Ethiopia is an especially opportune topic for a symposium at The Catholic University of America, which thanks to a recent gift by Gerald and Barbara Weiner now holds an invaluable collection of more than 175 Arabic manuscripts from Ethiopia, including a number of copies of the Qurʾān as well as exegetical works (tafsīr). Thus, ultimately, this symposium aims to locate the Qurʾān in Ethiopia, both as a context for its early development and as a location for its later reception.

Abstracts describing the precise topic treated with a length of approximately 200-300 words can be sent as an electronic version (pdf and MS word document) to Aaron Butts (buttsa@cua.edu). The deadline for submission is November 1, 2018.

Papers presented at the symposium will be considered for publication in an edited volume, which aims to make this interesting topic available to a wider audience.

Questions can be addressed to:

The aim of the summer school has been to provide the students with basic training in codicology and the research methods they will need when studying and analyzing Arabic manuscripts. Following morning lectures on different aspects of codicology, such as composition, writing surfaces, illumination, paleography and bindings, the afternoons were dedicated to hands-on sessions at the Royal Library, where participants were able to apply the knowledge and skills they had learnt, by examining manuscripts from the Arabic Collection.

The El Escorial Arabic Manuscript Collection (circa 2000 codices) consists mainly of manuscripts from the Library of Sultan Mūlay Zaydān, which became part of the Library of Phillip III of Spain in 1612. The collection is thus one of the very few from the Muslim world to remain virtually intact and is therefore considered to be the most important collection of Arabic manuscripts in Spain and one of the most interesting in Europe. 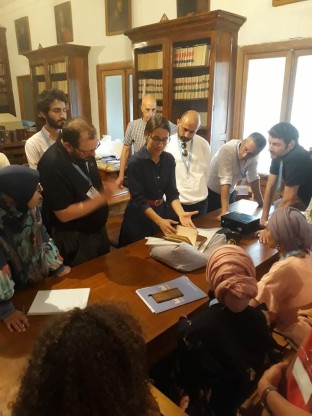 A hands-on session in the Library

In his review, Oakes writes… “In The al-Baqara Crescendo, Nevin Reda does an exceptional job of describing the Qur’ān in the vocabulary of art, aesthetics, acoustics, chanting, song, music, the rhythms and rhymes of orally-recited poetry, poetic-like rhetorical devices, and German terminology. Her emotive vocabulary and accessible writing style lures the reader into a feeling that her approach is holistic and that Sūrat al-Baqarah is coherent…”

Want to read more? For full access to the Review of Qur’anic Research (RQR), members can log in HERE. Not an IQSA member? Join today to enjoy RQR and additional member benefits!

The Department of Oriental Languages will hold its Second Aramaic and Syriac Studies Conference at the Cairo University (Egypt) between February-March of 2019.

Applications for attendance by observers are welcome and should be submitted by July 2018.

Conference Fees
US Fees include paper publication, accommodations, meals (3 days), a trip to new Library of Alexandria, and city tour.

The Koran in English: A Biography

For millions of Muslims, the Qur’an is sacred only in Arabic, the original Arabic in which it was revealed to the Prophet Muhammad in the seventh century; to many Arab and non-Arab believers alike, the book literally defies translation. Yet English translations exist and are growing, in both number and importance. Bruce Lawrence tells the remarkable story of the ongoing struggle to render the Qur’an’s lyrical verses into English—and to make English itself an Islamic language.

The “Koran” in English revisits the life of Muhammad and the origins of the Qur’an before recounting the first translation of the book into Latin by a non-Muslim: Robert of Ketton’s twelfth-century version paved the way for later ones in German and French, but it was not until the eighteenth century that George Sale’s influential English version appeared. Lawrence explains how many of these early translations, while part of a Christian agenda to “know the enemy,” often revealed grudging respect for their Abrahamic rival. British expansion in the modern era produced an anomaly: fresh English translations—from the original Arabic—not by Arabs or non-Muslims but by South Asian Muslim scholars.

The first book to explore the complexities of this translation saga, The “Koran” in English also looks at cyber Korans, versions by feminist translators, and now a graphic Koran, the American Qur’an created by the acclaimed visual artist Sandow Birk.*

Author: Bruce B. Lawrence is the Nancy and Jeffrey Marcus Humanities Professor Emeritus of Religion at Duke University. His many books include Who Is Allah?; New Faiths, Old Fears: Muslims and Other Asian Immigrants in American Religious Life; and Shattering the Myth: Islam beyond Violence (Princeton). He lives in Hillsborough, North Carolina.