To celebrate Sebastian P. Brock’s 80th birthday, Sankt Ignatios Theological Academy and Stockholm School of Theology, Sweden, hosted a conference on the “Future of Syriac Studies” in Sigtuna Sweden. The conference was partly funded by the Swedish Foundation for Humanities and Social Sciences. Participants from the US and Europe, the Middle East, Australia and Japan were welcomed to the conference by Michael Hjälm, (Sankt Ignatios Academy, Södertälje/Stockholm), Samuel Rubenson, (Lund/Sankt Ignatios Academy, Södertälje /Stockholm) and Archbishop Mor Polycarpus Augin Aydin (Syriac Orthodox Church in the Netherlands/Sankt Ignatios Seminary, Södertälje /Suryoye Seminary, Salzburg), who gave an overview of Sebastian Brock’s academic contribution to Syriac studies over the last half a century. George Kiraz (Gorgias Press) presented Professor Brock with the first edition of Gorgias Press’ new Sebastianoye series, developed in his honour.

As well as a wide range of papers on Eastern Christian subjects, the conference included a number of presentations that intersected with Islamic and qur’ānic studies, underlining the importance of Syriac and Syriac studies for research on the Qur’ān and early Islam.

Stephen J. Shoemaker (Oregan) discussed Syriac apocalypticism in light of the rise of Islam, stressing the importance of non-Islamic sources for understanding the emergence of Islam. From the sixth century onwards, Christians, Jews, and even Zoroastrians, believed they were living at the beginning of the end of time, Syriac apocalyptic writings, in particular, are therefore useful for understanding the rise of Islam. Professor Shoemaker concluded that Muhammad’s group of Believers can best/better be understood against the backdrop of this apocalyptic fervor, as eschatological expectations reached a peak in the seventh century.

Rachel Claire Dryden (Cambridge) presented a state of the field review of qur’ānic studies in relation to the role of Syriac. With few exceptions, the importance of Syriac literature for understanding the Qur’ān appears to have been ignored, or at least neglected, by scholars until the beginning of the current millennium. As well as highlighting current research on the Qur’ān that takes Syriac into account, Miss Dryden stressed the need for further collaboration between scholars of the Qur’ān and of Syriac, which has the potential to benefit both fields, by revealing more about the nature of Late Antique monotheistic debate and exchange.

Venue for the Syriac music performance at the conclusion of the evening’s events.  Photo Credit: Rachel Dryden

As part of Professor Brock’s 80th birthday celebrations, Mor Dioscoros Benyamin Atas, one of two archbishops of the Syriac Orthodox Church in Sweden and Scandinavia presented him with the Order of Sankt Ignatios for 2018, in recognition of his contribution to Syriac studies and his championing of the rights of the Syriac people. The evening concluded with a performance of Syriac music.

Huge thanks goes to Miriam and Michael Hjälm, Bob Kitchen and Gabriel Bar Sawame for the initiative and organization of the conference, which brought so many scholars of Syriac from different fields together in an environment that encouraged interaction and exchange.

Conference proceedings will be published in due course.

In his review, Powers writes… “Following in the footsteps of the Harper Collins Study Bible and the Jewish Study Bible, The Study Quran is a welcome addition to the field of qurʾānic studies. In response to a proposal from the publisher, the distinguished Islamicist Seyyed Hossein Nasr agreed to serve as the Editor-in-Chief and general supervisor of the project on the condition that the team of scholars who carried out this monumental task would include only Muslim scholars who accept the Qurʾān “as the word of God and an authentic revelation” (xl)…The three General Editors have produced a new translation of the Qurʾān that seeks to convey what the Arabic text actually says rather than what later commentators and/or translators said that it means (xlii). The stated goal of the commentary is to clarify difficult passages, to explain the inner meaning of the text, “when necessary,” and, generally, to provide a “reasonable account” of what Muslim authorities have said about the text as it relates, inter alia, to ritual, law, theology, ethics, metaphysics, spirituality, and sacred history (xliii)…”

Want to read more? For full access to the Review of Qur’anic Research (RQR), members can log in HERE. Not an IQSA member? Join today to enjoy RQR and additional member benefits!

This month marks another important milestone for the International Qur’anic Studies Association. Our journal–the Journal of the International Qur’anic Studies Association (JIQSA)–is now accessible through the online academic digital library JSTOR. Libraries and other institutions with a subscription to JSTOR can access JIQSA 1 (2016) HERE. This priceless partnership is the fruit of tireless years of work, and it is a testament to the culture of scholarship and collegiality fostered within IQSA. Our partnership helps fulfill IQSA’s Mission and Vision. Giving the world access to JIQSA through JSTOR encourages and facilities digital technology in the discipline and promotes cooperation across global boundaries.

This mutual cooperation would not have been possible without the help and generosity of our colleagues. From IQSA, special thanks go to Vanessa De Gifis, Michael Pregill and Anne Marie McLean. From JSTOR, my heartfelt gratitude goes to Jason Przybylski and Nicole Manfredo. 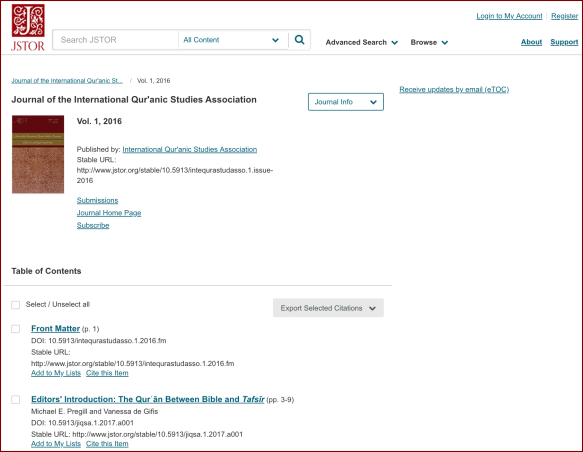 Finally, I use this fortuitous occasion to invite you all, if you have not already, to JOIN IQSA, ADVERTISE with us and SUPPORT our work! IQSA is an independent, member-funded 501(c)3 learned society. It offers five competitive membership rates–starting at just $25–and FREE online access to JIQSA, as well as newly reduced advertising rates. (IQSA members will continue to enjoy FREE access to JIQSA through our membership portal, in addition to JSTOR access through institutions)

On behalf of the Board of Directors and Standing Committees, I congratulate all current IQSA members and welcome new members to their ranks.

Have questions about the 2018 IQSA Annual Meeting to be held in Denver, Colorado from November 16-19, 2018. We have answers! Read up on some Frequently Asked Questions about this year’s annual meeting below:

Q: What are the dates of IQSA’s Annual Meeting?
A: The IQSA Annual Meeting begins and ends November 16-19, 2018 one day before the regular SBL/AAR Meeting.

Q: How do I register for the Annual Member as an IQSA member?
A: Register as an AFFILIATE MEMBER on SBL’s Meetings and Events page. Scroll to the bottom of the page for the Affiliate link and choose “International Qur’anic Studies Association” in the drop-down menu.

Q: Where can I find a schedule of events for the Annual Meeting?
A: IQSA  and SBL/AAR’s Program Book will be distributed in print and online as the meeting date draws closer. Members can chose to access the Program Book via mobile app, online, or in print while completing the registration process.

Q: Where can I find information about Housing and Travel Accommodations?
A: Visit SBL’s Meetings and Events page and/or choose your hotel during your online registration.

Q: Does IQSA provide funding or reimbursement for its members to attend the meeting?
A: At this time, IQSA does not have the resources to provide financial assistance for housing and travel at the Annual Meeting. However, IQSA encourages its members to seek financial aid through institutional grants and other funding.

Q: I will be traveling internationally. How do I obtain a non-immigrant Visa Letter?
A: Check the required box during online registration (see below) and email contact@iqsaweb.org to arrange for a Visa Letter.

The Annual Meeting includes panels for each of IQSA’s six program units:

We look forward to seeing you in Denver!