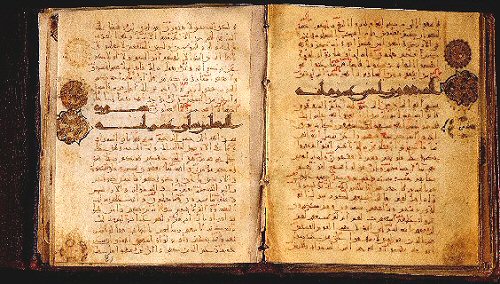 This week IQSA continues its interview series with Eleonore Cellard, PhD student in Qur’anic codicology at the Institut National des langues et Civilisations Orientales (INALCO) in Paris. In this interview, Eleonore Cellard presents her achievements and research in the transmission of Qur’anic manuscripts in early Islam.

Eleonore, what are your academic achievements in the field of Qur’anic studies?

During my masters in the Arabic Language at INALCO, I had the opportunity to attend Déroche’s seminar about the codicology of Arabic manuscripts. A great part of this seminar was dedicated to the Qur’anic manuscripts. I later obtained state funding for my PHD project at INALCO, titled “The written transmission of the Qur’an: Study of a corpus of manuscripts probably from the second/ninth century.” During these three last years, I conducted my research in conjunction with teaching at INALCO.

Since 2011, I have been involved in the Franco-German project Coranica, working on the edition of the most ancient fragments of the Qur’an. As part of this project, I presented my research at the event “Les Origines du Corans, le Coran des Origines” in the French Academy (March 2011) and organized a workshop, “Manuscripta Coranica,” in Paris (October 2012).

What is the aim of your research?

The Islamic Tradition has meticulously recorded how the Qur’an was written, reformed and read. This history has been transmitted over the generations, relegating the manuscripts to the obscure nooks of the mosque. As testaments to ancient times, the manuscripts have preserved their own history, and today they are starting to reveal the imprecision of our knowledge of the Qur’an’s history.

The aim of recent academic studies is to better understand the manuscripts, their codes and their contexts. Thanks to this analysis, we hope to reach a new vision of the history of the transmission of the Qur’anic text by rearticulating the Islamic Tradition and Qur’anic materials.

Could you explain your work on Qur’anic manuscripts?

My study is based on a corpus of nine fragments kept in the Bibliothèque Nationale de France (Paris). The homogeneity of this corpus was first established according to paleographic criteria; indeed, all the fragments belong to the C group of Déroche’s classification system. According to this classification, these fragments could probably be dated from the second to the eighth century to the beginning of the third to the ninth century.

1. The problem of the manuscripts’ dating, using the paleographic criterion

2. The question of the textual division

3. The orthographic rules involving the notation of long vowels

4. The use of a dotting system for indicating the vocalization

1. As of now, the manuscript’s dating remains the main concern in our studies. Indeed, the physical and chemical analyses cannot propose any precise dating without an important chronological margin of +/- 50 years. This margin is considerable regarding the eventful history of the first three Islamic centuries. The paleographic criterion could be another method of dating. Based on comparisons between letters’ forms, it aims at reconstructing the evolution of the Qur’anic script. However, this approach, still undeveloped, presents two major difficulties for us: first, the lack of dated examples—manuscripts or inscriptions—and second, the existence of interferences between different paleographic styles in our C group. It thus implies the coexistence of different scripts, probably used in various regions, and is therefore at variance with the hypothesis of a linear chronological succession of scripts.

2. The question of the textual division covers two aspects:

3. At the orthographic level, the corpus reveals inconsistencies in the notation of long vowels: on one hand, we have no systematic notation of the medial alif, and on the other hand, we notice an important confusion between the values of the alif mamdûda and the alif maqsûra. According to these observations, we may wonder: What exact orthographic rules do these fragments follow? Are the variations some sign of a chronological evolution or a geographical repartition? Could these elements reflect the evolution of the Arabic language during this period?

4. The fourth problem concerns the vocalization of the manuscripts. The systems observed differ from what is recorded in the Islamic Tradition on two specific points: