If you can’t judge a book by its cover perhaps you can by its title.  The “Hilali-Khan” translation of the Qurʾan is entitled Interpretation of the Meanings of the Noble Qurʾan in the English Language: A Summarized Version of At-Ṭabarī, Al-Qurtubi and Ibn Kathir with comments from Sahih al-Bukhari.  With this title readers are reminded that a translation of the Qurʾan should not be confused with the Qurʾan itself, even while they are assured that this translation is based on reliable Sunni authorities who interpret the Qurʾan in the light of hadith.  The Hilali Khan translation is published by Dar-us-Salam, a Saudi publisher (with an American office in Houston) connected with the King Fahd Complex for the Printing of the Holy Qurʾan in Medina.  In fact the translation of Muhammad Taqi al-Din al-Hilali (of Saudi Arabia) and Muhammad Muhsin Khan (of Pakistan, translator of the Dar-us-Salam Arabic-English version of Bukhari’s Sahih) is subsidized by the Saudi government and distributed for free in many mosques and to many libraries throughout the English speaking world; it was chosen to replace the translation of Yusuf Ali, a translation considered suspect by certain tradition-minded Sunnis.

However, the Hilali-Khan translation has been criticized for the manner in which hadith – including those with an anti-Jewish or anti-Christian flavor — are integrated into the translation.  The most famous example of this is verse 7 of al-Fatiha, which Hilali-Khan renders: “The Way of those on whom You have bestowed Your Grace, not (the way) of those who earned Your Anger (such as the Jews), nor of those who went astray (such as the Christians).”  Yet it seems to me that there is something felicitous about the interpretive style of Hilalli-Khan translation.  All translations in the end are interpretations, and at least Hilali-Khan are truthful in their advertising.  In addition, their translation offers frequent citations (in English) of those hadith which are central to the tradition-minded Sunni reading of the Qurʾan.  For example, on Q 17:79 (which refers to a maqam mahmud, “a station of praise”) they cite the following hadith, “On the Day of Resurrection the people will fall on their knees and every nation will follow their Prophet and they will say, “O so-and-so! Intercede (for us with Allah)’, till (the right of) intercession will be given to the Prophet (Muhammad) and that will be the day when Allah will raise him to Maqam Mahmud.”  These sorts of references make Hilali-Khan a useful reference work.

Quite unlike the English translation of Hilali-Khan, and yet unique and useful in its own way, is the French translation of (the Swiss-Palestinian) Sami Awad Aldeed Abu-Sahlieh.  One thing that Abu-Sahlieh’s translation does have in common with that of Hilali-Khan is a long title: Le Coran: Version bilingue arabe-française, ordre chronologique selon l’Azhaar, renvois aux variantes, abrogations et aux écrits juifs et chrétiens (The Qurʾan: A Bilingual Arabic French Version in the Chronological Order of al-Azhar, with References to Variants, Abrogations, and Jewish and Christian Writings).  As advertised, the translation of Abu-Sahlieh begins not with al-Fatiha but instead with al-ʿAlaq (96) the Sura which appears first in most traditional lists of the chronological order in which the angel Gabriel revealed the Qurʾan to the Prophet.  It ends not with al-Nas (114) but with al-Nasr (110).

Meanwhile Abu-Sahlieh includes references throughout his translation to traditional variant readings (qiraʾat), to reports on which verses (according to the tradition) abrogate or are abrogated, and to parallel or otherwise relevant texts from the Bible or other Jewish and Christian writings, notably the Talmud.   Thus for the ending of Qurʾan 9:77 yakdhibuna (“They used to tell lies”) Abu Sahlieh notes the variant yukadhdhibuna (“They used to deny”).  Three verses later, regarding Qurʾan 9:80 (“Whether or not you ask forgiveness of them, even if you ask forgiveness of them seventy times, God will never forgive them….”) Abu Sahlieh notes: A. the verse is abrogated by Q 63:5 and B. 70 is the same number given for mutual forgiveness in Matthew 18:22.  Readers might be critical of certain aspects of Abu Sahlieh’s approach, but they will likely also be grateful for the references that make his translation, like that of Hilali Khan, a useful reference work.

A part of the Qur’an Seminar, a year-long initiative directed by Gabriel S. Reynolds from the University of Notre Dame, is to develop a project on cross-references of the Qur’an. This cross-references project will provide for nearly every verse in the Qur’an a selection of other verses which shed light upon, clarify, or explain the verse you are reading.

As is known, the Qur’an in its printed edition has not yet been cross-referenced, in spite of the fact that al-mufassirūn (Qur’an commentators) realized quite early on the central importance of tafsīr al-Qur’an bi al-Qur’an (interpreting the Qur’an through the Qur’an itself). Even some modern Qur’an exegetes like the Iranian scholar Muḥammad Ḥusayn Ṭabaṭabā’ī (d. 1981) claim to follow this method. It must be pointed out, however, that the way Ṭabaṭabā’ī interprets the Qur’an in his al-Mīzān shows that his reliance on the internal evidence of the Qur’an is much less than his use of other sources as he offers not only an explication (bayān) of a given verse, but also an extensive discussion of various aspects such as historical, philosophical, and social aspects. It seems safe to say that in the long history of tafsīr, this tafsīr Qur’an bi al-Qur’an has not been dealt with as an important topic in its own right.

Perhaps, the most extensive treatment and pioneered work on tafsīr al-Qur’an bi al-Qur’an is that composed by Rudi Paret entitled Der Koran: Kommentar und Konkordanz. Paret’s work is certainly very rich, which includes – in addition to possible cross-references – interpretations of and alternate renderings for a given verse or passage. Furthermore, as the term “Konkordanz” may indicate, his Der Koran provides all identical or similar phraseology and usage in different places of the Qur’an, a model that will not be followed in this cross-references project.

The need of such a work, therefore, is obvious to all readers of the Qur’an, because in the current available printed editions of the Qur’an there is nothing to indicate that certain passages shed light upon, clarify, or explain other passages. 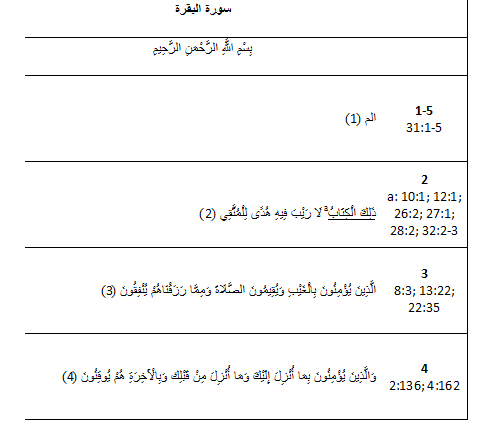 Are you currently working on a new publication or academic project on the Qur’an? Do you have innovative historical, scientific or artistic insights on the Qur’an that you would like to share? If so, you should consider writing a guest blog post for IQSAWEB. It’s easy. All you need to do is summarize your thoughts in about 500 words or less and send them to contact@iqsaweb.org. Audio-visual content is welcome. Guest blogging is also a great way to showcase your work and ideas to the world. Your post might also generate valuable discussion and debate. Feel free to browse the current blog posts on IQSAWEB, and do not forget to tell your colleagues!

Since its press release in May 29, 2012 the International Qur’anic Studies Association (IQSA) has received the support of the academy as well as the public. In the months following, the media took much interest in IQSA, as well as SBL’s instrumental role in supporting this Qur’anic Studies initiative. Thanks to this widespread recognition, university professors, graduate students and academic institutions around the world continue to reach out to us and form valuable partnerships with IQSA. As co-directors of this initiative, we understand that forming meaningful relationships with sister organizations will be key to the success and growth of IQSA in the long term. We would like to take this opportunity to reach out to the members of SBL especially, and inform them about the vision of this initiative and their role within it.

On November 18-19, 2012 IQSA will hold its first organizational meeting in Chicago. Its co-directors and steering committee will discuss several important matters, including governance, publishing, relationship building, fund raising and planning our first meeting in 2013, alongside SBL’s annual meeting. Our provisional plan is for our annual  meetings to alternate between North America (alongside SBL) and a site in the Islamic world. We also plan on establishing a journal, a newsletter, and a monograph series that will publish in English as well as Arabic. We want IQSA to be ‘the place’ where Qur’anic Studies scholars from around the world, especially those in Western and Islamic countries, talk to one another, share cutting edge research, collaborate and publish their work. The collegial environment we will work towards will also make IQSA a center that fosters respect and mutual understanding through scholarship.

One of the program units to be housed at IQSA conferences will explore the Qur’an’s dialogue with Biblical Literature; another will likely study the text in light of Semitic Linguistics. These areas of scholarship will prove to be a ‘bridge’ between members of IQSA and those of SBL. Scholars of Biblical Studies will have the opportunity to learn how Biblical traditions were adapted within the Qur’anic milieu. And scholars of Qur’anic Studies can learn how the text belongs to ‘the world of the Bible.’ You are invited to visit the initiative’s blog (http://iqsaweb.org), subscribe to IQSA’s e-mail list and keep up to date with our news and posts. We thank SBL for its support and look forward to working with its members.